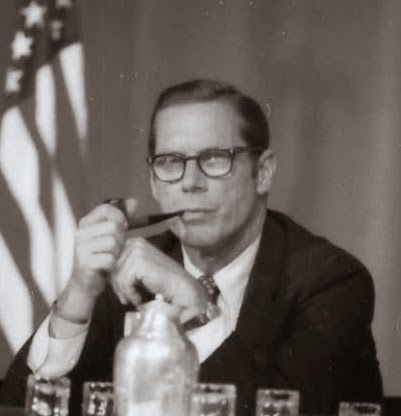 I have never much liked the expression "giving back," as that phrase is used to denote the impulse to support good works, and to make charitable contributions. While I applaud the fact of people "giving back," by virtue of making charitable contributions and supporting good works, the phrase itself has always had an offensively self-congratulatory ring to it, at least to my ears.

At any rate, a recent reference to the activity of "giving back," in a column printed in the February 7, 2014 edition of The Wall Street Journal, prompts my comment today.

Pictured is William E. Simon, who served as the 63rd Secretary of the Treasury, during the period from May 8, 1974 to January 20, 1977. He served, in other words, in the Administrations of three different Presidents: Nixon, Ford, and Carter.

Among other things, Simon has been celebrated for his "legendary success" in American business. He made lots of money, and lots of it by utilizing "leveraged buyout" techniques to multiply wealth (the proliferation of such leveraged buyout techniques being one of the first indications that operations in the "financial sector," as opposed to the manufacturing and sale of real goods, would be the defining quality of modern day capitalism in the United States). Simon was generous with his money, which means that he has been recognized as a "philanthropist," as well as for his successful business career and his career in public service. He created, among other things, the William E. Simon Foundation.

This brings me to the February 7, 2014 edition of The Wall Street Journal. In an opinion piece titled "What Bill Gates Won't Tell You About Giving Money Away," James Pierson, the current President of the William E. Simon Foundation, had this to say:

When it comes time to donate, don't think that you are "giving back," because you haven't taken anything in the first place. The vast majority of Americans who become wealthy have not done so by exploiting the poor. Nor have they simply lived off their family's fortune.

Two-hundred seventy-three people on the 2013 Forbes 400 list earned their wealth through businesses they started or invested in. And making all that money had many positive benefits for society. Thanks to the technology developed by Bill Gates or the inexpensive goods available to people who shop at Wal-Mart or the salaries paid by Facebook, America benefits from the contributions of wealthy individuals before they give away a dime.

So, Mr. Pierson doesn't like the term "giving back" either, but he trumps my sense that the phrase is a little bit self-congratulatory by taking the incredibly self-congratulatory position that the people who have made lots of money in our economy didn't get anything from anyone else. They did it all themselves!!

That's not the way I see it!

The "wealth of nations" is socially created, not individually created. If we could all get our heads around that concept, we could start dealing with the outrageous economic inequalities in this country by "taking back."

Better "taking back" than waiting around for that "giving back" thing. At least that's my view!