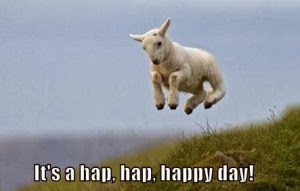 Someone who read my posting yesterday about "Applied Anthropology" suggested that I should consult the World Happiness Report, 2013. Let me pass on that good advice.

Whether we achieve it collectively or individually (and I am holding out for a happiness that includes all of us, not just the privileged), "happiness" does seem to be a worthy goal. Some might even argue that the pursuit of happiness is the best way to find a satisfactory answer to those two "Stockdale Questions" I keep thinking about: "Who am I, and what am I doing here?"

For Americans, of course, our right to "pursue happiness" is at the foundation of our national existence. A concern about happiness is central to what might be called our national "project."

The World Happiness Report is a 156-page document written by "a group of independent experts acting in their personal capacities." The Table of Contents page makes clear that the "views expressed  ...  do not necessarily reflect the views of any organization, agency or programme of the United Nations."

So, what views are expressed in the World Happiness Report, 2013? In essence, the report reflects a commitment to the concept of "applied anthropology" as a guiding approach to the development of national and global policy:

There is now a rising worldwide demand that policy be closely aligned with what really matters to people as they themselves characterize their lives. More and more world leaders including German Chancellor Angela Merkel, South Korean President Park Geun-hye and British Prime Minister David Cameron, are talking about the importance of well-being as a guide for their nations and the world. We offer the 2013 World Happiness Report in support of these efforts to bring the study of happiness into public awareness and public policy. This report offers rich evidence that the systematic measurement and analysis of happiness can teach us much about ways to improve the world’s well-being and sustainable development.

"Well-being" is treated as a subjective assessment, and the report investigates the extent that subjective feelings of well-being can be correlated with objective measures. Correlations are found with all of the following factors:

That sounds like a pretty good political platform to me. And we do live most immediately in a "political world," a world we create ourselves.

Our national "project," the collective effort that led to the creation of our nation (e pluribus unum), and that still motivates us, can best be described as the "pursuit of happiness through politics." That's really what the Founding Fathers were talking about, and they didn't even have the tools of "applied anthropology" to get them there!