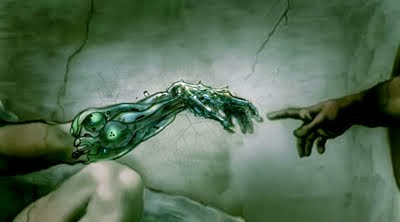 The San Jose Mercury News ran an article on December 21st, with the headline "Human 2.0." The article heralded a "new threshold" in human evolution. Bioengineered devices are being placed within, on, or near people, and are transforming them into "computerized people." Up until now, human beings have been "biological" creatures. Soon, we will become a kind of "combination of ingredients" product.

I remain skeptical that much good will come from actions that I think are based on a confusion between the World of Nature and the human world that we create. The "computerized people" concept is based on such a confusion, in my opinion.

For me, this confusion seems to pose dangers at least as great as any benefits that may be forthcoming. Consider, for instance, the following statement:

The idea initially is to have the little circuits gather detailed data on brain functions. But eventually ... the electronic swarms may prove useful for “controlling devices via thought....”

And what about the opposite possibility, controlling thought via devices (like the devices heralded in the article), that will turn us into "computerized people?"

Let's not have any illusions about what we are getting into here. Turning human beings into computer directed robots is not my idea of "human" progress.