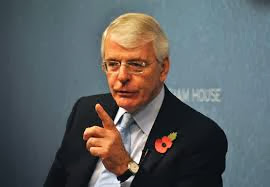 Pictured is Sir John Major, a former Prime Minister of the United Kingdom, and a leader of Britain's Conservative Party from 1990 to 1997.

I don't generally follow British politics very closely, although I do admit to having gone from admiration to disgust as Tony Blair (also a former Prime Minister, but of the Labor Party variety) turned into a lapdog for George W. Bush. Blair, in fact, took over as Prime Minister in 1997, as John Major left office.

In October of this year, I heard about an issue of New Statesman, edited by comedian and actor Russell Brand, that was promoted as "The Revolution Issue." New Statesman is a British journal focusing on current affairs and politics in the United Kingdom, and proclaims that it has been "free thinking since 1913." Since I have been a sucker for revolution since 1776, I promptly sent away for the "The Revolution Issue," and it has just arrived in my Santa Cruz mailbox six weeks later. Maybe I should have read the whole thing online. You hate to make a revolution wait.

I may have more to say about Russell Brand's "Revolution" issue later on, but before I even got to the articles about revolution, which are hidden away among other offerings, I learned that Britain and the United States have a number of things in common, despite those events of 1776. For instance, the column on the back cover complained about screaming, pushy parents at the football (soccer) games of British kids.

More to the political point, the opening editorial in the "Revolution" issue of New Statesman was not about revolution at all, but about British energy policy, and they quoted John Major favorably. Major's comment contains some advice that U.S. politicians (from the President on down) should take to heart. I am proud to commend it to you:

Governments should exist to protect people, not institutions.