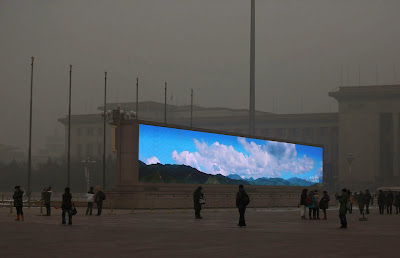 My first blog posting on the topic of virtual reality was titled simply "Virtual Reality." That posting is dated June 21, 2010. Click the link if you'd like to take a look at it.

I had actually forgotten all about that first "Virtual Reality" posting, but that posting does turn out to have a certain connection to the posting you are reading right now. You might say it's a Chinese connection.

This current posting has been prompted by the picture shown above. The picture was published as part of the Atlantic In Focus series titled "2013: The Year in Photos, January - April." It is #15 in a series of forty photographs. All the photos are well worth seeing. The image above has the following caption:

During a time of dangerous levels of air pollution, a bright video screen shows images of blue sky on Tiananmen Square, on January 23, 2013 in Beijing, China.

In fact, we can't live inside a video monitor or in any "virtual" reality. We actually live in, and are ultimately dependent on, the "real" reality which is the World of Nature. That's the world we did not create.

Trying to pretend or convince ourselves that life is alright in the world that we have created, if in fact it isn't, would be making a big mistake. The smog in Beijing isn't going to go away just because we have a nice picture of Nature to look at. If we want to live in a world like the one depicted on screen, we will need to do something in our world (the world of smog and congestion) to change the "real" reality of the world we inhabit. Escaping to a "virtual" reality is just not going to work.

My first "Virtual Reality" posting cited to the thinking of a Chinese Philosopher, Philip Zhai, also known as Zhai Zhenming:

R: "So there is a serious philosophical argument that human-created 'virtual realities' can have the same ontological status as 'actual reality.' Philip Zhai is the guy who says that."

Well, with respect to the photo of the blue skies in Beijing, let's hope we can make them fully real. The way to do that, though, is to acknowledge the dependence of our world on the World of Nature, the world where those blue skies actually exist.

Zhai Zhenming may be right that everything in our human world is "created" by us, and thus that all our human-created realities, of whatever nature, are actually a kind of "virtual" reality.