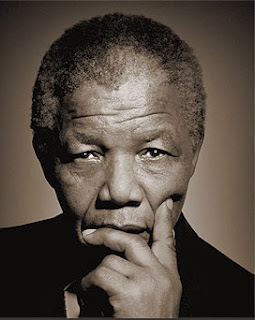 Wallace Baine writes columns for the Santa Cruz Sentinel, my hometown newspaper. On Sunday, December 8th, he wrote a column recognizing the great achievements of Nelson Mandela, and asked a poignant question. Why doesn't the United States have a public figure comparable to Nelson Mandela, someone who "could be a unifying force, who has the moral authority to command respect and admiration and ... to be a positive symbol for America in the world?"

Baine was able to identify a number of figures from the entertainment industry who seem to generate goodwill across social divisions, and around the globe. These include, in Baine's list, Mr. Rogers, Willie Nelson, Bill Murray, and Morgan Freeman, an actor who has played Mandela in the movies. But Baine found no figure from the political arena that was in any way comparable to Mandela. He doubted, in fact, that even George Washington could "escape the love him / hate him vortex" that seems to typify contemporary politics, and that Baine laments.

For the record, George Washington was, at least to some degree, a figure who did command the kind of position that Nelson Mandela occupies today. Washington was the symbol of the American Revolution (as Mandela symbolizes the revolution that occurred in South Africa), and Washington did, more or less, succeed in placing himself "above" the partisan strife that immediately ensued upon ratification of the Constitution. Let's not forget that the political bitterness and divisiveness between John Adams, our second President, and Thomas Jefferson, our third President, and their partisans on either side, was at least as virulent as anything we see in politics today.

In the normal course of human events, political figures do not become "unifying" figures because the purpose of politics is not "unification" but the need to make decisions when there is disagreement about what the society should do. Politics is supposed to be filled with conflict and controversy, and debate and dissension, with the resulting decision not being the "unification" of the various positions, but the adoption of a particular course of action by the body politic. Those engaged in any genuine politics, in which real issues are being debated, with real stakes on the table, realize that they are not going to be "unifying" figures. Hopefully, they will be recognized for their achievements nonetheless. The pursuit of "unification" is a wistful hope that human disagreements might be abolished, and the need to make difficult choices avoided.

I have been a politician. That's my view.

If we want a truly "unifying figure" in our politics, one like Nelson Mandela or George Washington, we are going to need to have another revolution first. As Hannah Arendt says in her book On Revolution, revolutions begin a "whole new story," and those who can help us accomplish that do, indeed, become revered, and rightly so.

Postscript:
For an interesting commentary on Mandela and violence, published by the Hannah Arendt Center at Bard College, click this link.