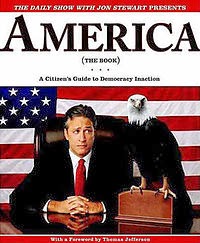 I haven't read the book that I am using to illustrate this posting, but since it's by Jon Stewart, I bet it's good. I just like the subtitle.

It may be a little hard to see, but the subtitle to Jon's Stewart's America (THE BOOK) is: "A Citizen's Guide to Democracy Inaction." That's getting pretty close to summing it all up, when we consider the state of democracy today in these United States.

On Tuesday, November 26th, I had an occasion to spend some time at a meeting of the Santa Cruz City Council, which held a hearing to consider how best to "reset" the conversation between the City and its citizens on the subject of desalination. I thought I was going to see some democracy "in action," since lots of people came out to give the City's elected officials their ideas about what to do. Not so!

The City Council and the city staff have been pushing hard for a desalination plant, and it's pretty fair to say that the public is not with them. In a recent initiative election, something like 72% of those who voted took decision making power with respect to desalination out of the Council's hands, by passing an initiative measure that will let the voters have the last word.

Furthermore, it's not just members of the public who don't have a lot of confidence in the City's massively expensive push for desalination. The "responsible agencies" who would have a lot to say about the actual construction of such a desalination plant expressed great reservations about the City's failure (and refusal) to consider alternatives. These "responsible agencies" include the California Department of Fish and Wildlife, the National Marine Sanctuary, the Coastal Commission, and NOAA Fisheries. Their reservations came in the form of comment letters on the Draft Environmental Impact Report, or EIR, that the City prepared on its proposed desalination project. In effect, these governmental agencies all agreed with the exact objections that ordinary citizens had been raising for years, and that the City staff and elected officials had been ignoring.

Shortly after the close of the EIR comment period, which included 400-plus mostly negative comments, the City's longtime Water Director, and an official of a statewide, industry-supported desalination lobbying group (to which the City of Santa Cruz continues to belong), abruptly retired, and the Mayor and the City Manager issued a joint press release, indicating that they wanted to "reset" the conversation on desalination.

So, the City Council billed its meeting on November 26th as the way to start that "reset" process. About 50 people testified, including representatives of groups that have been working on the issue, and when they were done, one of the Council Members pulled out a pre-prepared motion, handed it around, and the Council proceeded to adopt that motion, with minor changes, almost totally ignoring everything that the citizens had said. They acted unanimously, too. Not even one City Council member thought it was somehow wrong to ignore the testimony that the Council had invited, by setting up the public hearing in the first place.

My evening sojourn with the Santa Cruz City Council provided a splendid example of that "democracy inaction" that Jon Stewart referenced in the title to his book.

True democracy is denied when elected officials act as if they, and they alone, know what is right, so that they can ignore what ordinary citizens think. The "conversation" on desalination, between City representatives and the public, has definitely been a "one-way" proposition. Basically, the City has been telling the citizens that desalination is good for them, and that they should sit down and shut up, and let the City get on with taking care of their City. Any kind of a real "reset" in the conversation about desalination will require that the City start making that conversation "two-way."

This may be a dream that won't come true. While the elected officials talked about a "reset," it's clear that nothing has changed for the Santa Cruz City Council, and that it is still a one-way conversation as far as the elected city officials are concerned. It is truly offensive for elected officials to invite testimony from members of the public, who then come and pour their hearts out on an issue, only to have the City Council not only disregard (but not even comment on) what the people have said.

The scary part is that local governments in Santa Cruz County are probably doing better than many other governments, including our federal government. But that's no excuse for the City Council's action last Tuesday!