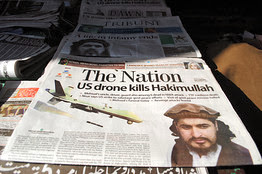 "Autonomous weapons are coming and can save lives. Let's make sure they're used ethically and legally."

The statement above is the considered opinion of Kenneth Anderson and Matthew Waxman, authors of a recent article published in The Wall Street Journal. Anderson is from the Hoover Institution. Waxman is from Columbia Law School. In April 2012, they published a paper entitled "Law and Ethics for Robot Soldiers." Click the link to download that paper should you wish to investigate their thinking in a more scholarly and academic format. Otherwise, you can get a "popular" rendition by clicking the quote, above.

My personal view is that killing people by remote control, individually, and from a great distance, cannot be accomplished "ethically and legally."

In the United States, we use the phrase "due process." When penalties are imposed, including particularly the death penalty, a "due process" requirement is fundamental. To the extent that killing other people can ever be deemed "ethical" or "legal," that due process requirement must be an absolute. Those unclear on the concept of due process might like to check out The Bill of Rights.

In wars, the "due process" concept, of course, is mainly set aside, but the idea has historically been that those armies that appear on a common battlefield will operate on the basis of some relatively well understood principles of fairness - the "rules of war," the wartime equivalent of "due process." For instance, in a war, it has always been a given that the people fighting will be there in person, and will be exposing themselves to danger and death, at the very same time that they are trying to bring death to their wartime opponents.

Robot soldiers don't quite conform to this historic understanding. Certainly the drone murders that our President is now routinely authorizing don't conform to "due process" concepts either. Even less so.

If we want a world that has even a chance of surviving, we need to be running away from "Robot Killers" as fast as we can. That's what I think, anyway.