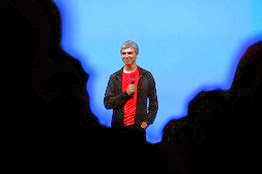 Starting an argument is often a good way to get a discussion going. Lots of our discussions really do take the form of arguments. On November 4, 2013, Farhad Manjoo used his High Definition column in The Wall Street Journal  to pick a fight with Silicon Valley, and perhaps with Google in particular.

The print edition of the newspaper titled Manjoo's column "Silicon Valley's Arrogance." Online, the column ran under the heading "Silicon Valley Has an Arrogance Problem." If you are interested, click the link to read the article in its entirety. Here is the paragraph that grabbed my attention:

But there was something more significant about Mr. Srinivasan's talk than simply a rehash of Silicon Valley's grievances. It was one of several recent episodes in which tech stars have sought to declare the Valley the nation's leading center of power and to dismiss non-techies as unimportant to the nation's future.

I have noticed that phenomenon on the Santa Cruz County side of the hill, too. The idea is that "non-techies" are not really going to be important, going forward. The Civinomics idea that I wrote about a day or so ago may contain a dollop or two of that perspective, or so it seems to me. More fundamentally, though, the powerful magic that we are able to perform through the concatenation of clever software and hand held power computers (also called "cellphones") can give us the idea that our fundamental social, economic, and environmental problems are going to be "solved" by technology.

I don't think so, and particularly not when the business model for so many of the high-flying technology companies, from  Facebook, to Google, to Twitter, to Yahoo is to use the information they collect about us to sell us stuff, so that an ever-increasing drive to consumerism is the the engine of our technological advance.

To my mind, if our human communities are going to survive, and have a future, it will because we decide to buy and consume less, not more, and to find a way to live in a better balance with the Natural World that sustains everything we do.

Human arrogance, not just "techie" arrogance, has driven our human civilization to the brink. More arrogance will push it right over.