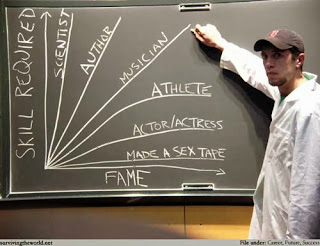 That book I have been reading, An Intimate History of Humanity, has a chapter entitled "Why people do not complain." In it, Theodore Zeldin discusses the views of Henri Laborit, a French physician, writer, and philosopher. Among his other accomplishments, Laborit invented Largactil, one of the most widely used modern tranquilizers. People in the United States know it under the name Thorazine.

According to Zeldin, Laborit believes that "running away" is a good life strategy, because once caught in a competition for superiority, you lose your independence. The purpose of life, says Laborit (speaking as a biologist), is to "survive."

Since none of us do survive life, you can see how easy it is to develop a bad case of existential angst. I think we need to revisit the premise that "survival is the purpose of life."

In the meantime, I was happy to run across a blog called "Surviving The World," from which the picture above was taken. As of this week, the author has posted something like 1,939 lessons. The picture above illustrates Lesson #5.

Lesson #1 is pictured below. It does say something about "survival" as the main purpose of life.

I think the suggestion is that we are supposed to be creating something new, in whatever time we have.

Best to admit that "surviving" is not a real option! 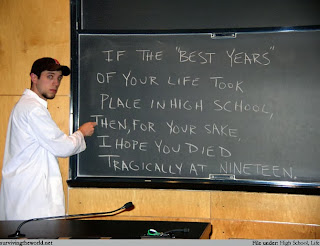