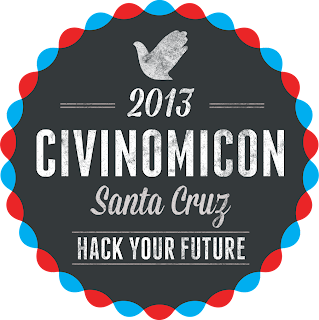 It is happening today, November 16th! If you are inclined to be a part of Civinomicon, you can register online, and show up today and tomorrow at Cruzioworks in downtown Santa Cruz.

If you would like to learn more about "hacking your future," here's the Civinomicon video. And here's a video about Civinomics in general. I can even provide you with a pictorial representation of the Civinomics idea.

According to the originators of Civinomics, one of the big problems with our current system of representative government is that it is "highly politicized." That's what the video about Civinomics says.

This Quarter, I have been teaching students at UCSC that the following equation defines how government operates:

This formula assumes that our governmental system is going to be "politicized." Everything starts with politics.

Maybe there is some way to banish politics from government, and to figure out how to achieve universal health care, greater economic equality, and the preservation and protection of our natural environment through some system that lets us formulate ideas and vote online. That's what Civinomics seems to promise as a possibility.

And if Civinomics can really do that, and can teach us a way to "hack our future" so that "highly politicized" public debate and disagreement either disappears or is greatly attenuated, and so that we can move more directly from an identified civic problem to an effective "good government" solution, then let's give it a look.

Let's also remember, though, that our governmental system has been defined, precisely, by the intentional injection of checks and balances, and conflict and controversy, into the very heart of our governmental process, and that we have been bemoaning the resulting "highly politicized" system of government since the Administration of George Washington. It may be that even high-tech collaboration software will not be able to take the "politics" out of government.

So: you can color me skeptical.