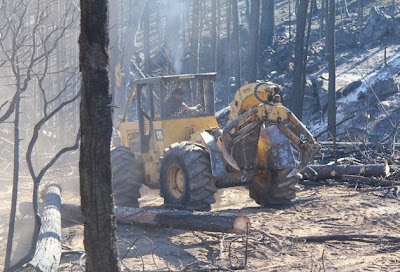 An editorial in yesterday's edition of the San Francisco Chronicle urged Congress not to adopt proposed new rules that would encourage "fire salvage logging." A bill pending in Congress would promote salvage logging in the Sierra, following up on the massive Rim Fire. Even wilderness areas and a portion of Yosemite National Park would be opened up for the bulldozers.

"What's wrong," the editorial said, "with cutting down blackened but usable trees to feed a hungry lumber market...?"

As it turns out, there is a lot wrong with that, as the Chronicle pointed out: "It may seem at first glance that a post-fire landscape is a catastrophe ecologically," but that is not actually true. The fact that a burned over forest doesn't "look pretty" to human eyes does not justify human efforts to reengineer nature. Bringing in the bulldozers can have massively negative ecological effects.

It is always wise to remember that humans often believe that "our" creations and efforts are superior to what the world of Nature provides. We need to resist our engineering impulses. The fire salvage logging issue is one good example of what ought to be a general principle.

Let's not assume that we can do a better job than Nature does in making arrangements for the Natural World. Ultimately, we depend on the world that Nature provides. Thinking we can substitute our own ideas for natural processes is a big mistake.

The Chronicle editorial got it right. Let's keep our big mitts off! Things will be better if we do. And that's what the scientists are telling Congress.