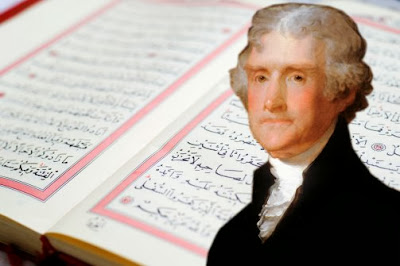 In a recent posting to this Two Worlds blog, I took exception to a claim by Laina Farhat-Holzman, a sometimes columnist in my hometown newspaper. She proclaimed that a "common culture" is an "essential element" of a successful Republic. I disagreed.

I consider that our Republic has been largely "successful," and that it was founded on a premise exactly opposite to the premise that "success" depends on the existence of a "common culture."

The "greatness" of the democratic system established in our Constitution is precisely that it sets up a civil government that operates within a "political" sphere, a sphere in which democratically enacted "laws" state the rules, [and without] any commitment to "culture" whatsoever.

A new book confirms this understanding of American democracy in a pretty dramatic way. Thomas Jefferson's Qur'an: Islam and the Founders indicates that Thomas Jefferson, James Madison, and George Washington "spurned exclusionary arguments, arguing that America should be open to Muslim citizens, officeholders, and even presidents."

Even though I majored in American History in college, I knew nothing about the Founders' specific commentaries on Islam. I argued against Farhat-Holzman's claims based solely on my general understanding of how we have structured our democracy. The fact that the Founders specifically considered Islam in connection with the discussions that led to our system of government reinforces the idea that any requirement for a "common culture" was specifically kicked to the curb by the political thinkers who established democracy in America.

Our system is built on a rigorous separation of the "political" world from the personal world of "culture" and religion. That "separation of Church and State," protected by the First Amendment, is one of the things that has made it possible for our democracy to survive, and for our society both to endure and to progress.

Our welcome to immigrants is not only consistent with that basic understanding of how our government works, but welcoming such diversity, including providing a welcome to "cultural" diversity, is how we have implemented, in a very specific way, the democratic promises made in our Constitution.

It is only because we have welcomed and protected diversity that we have so prospered as a nation. Turning away those poor masses, yearning to be free, would have impoverished and not enriched us.

No "culture test" has ever been posed in connection with American democracy, and on that fact is built any claim to "greatness" that we might advance on behalf of these United States.