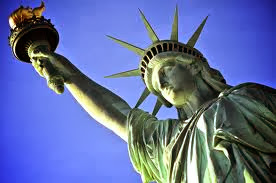 The New Colossus is a sonnet by the American poet Emma Lazarus. It was written in 1883 as a donation to an auction of art and literary works, the purpose of which was to raise money to build the pedestal upon which our Statue of Liberty now stands.

In 1903, a plaque bearing the text of the poem was mounted on the inner wall of the pedestal. Since that time, The New Colossus, like Liberty herself, has become famous as a statement of what America stands for, and a welcoming signal to immigrants arriving from abroad:

The New Colossus
Not like the brazen giant of Greek fame,
With conquering limbs astride from land to land;
Here at our sea-washed, sunset gates shall stand
A mighty woman with a torch, whose flame
Is the imprisoned lightning, and her name
Mother of Exiles. From her beacon-hand
Glows world-wide welcome; her mild eyes command
The air-bridged harbor that twin cities frame.
"Keep, ancient lands, your storied pomp!" cries she
With silent lips. "Give me your tired, your poor,
Your huddled masses yearning to breathe free,
The wretched refuse of your teeming shore.
Send these, the homeless, tempest-tost to me,
I lift my lamp beside the golden door!"

Before we become too misty-eyed, however, thinking about the profoundly human sentiments expressed in Lazarus' poem, and how important this openness to immigrants, and to immigration, has been to all Americans, and to the history of our nation, let's not forget the immortal words of Susan Eloise Hinton:

That was then. This is now.

In 1990, roughly 100 years after Liberty Enlightening The World found its home in New York Harbor, the United States government enacted our modern way to welcome immigrants to our shore. It's called the EB-5 Program, and it welcomes immigrants who can bring with them a minimum of a million dollars.

You can read about it here.

If we have "the golden door," you had better bring your gold, if you want to get in.

Give me your rich!