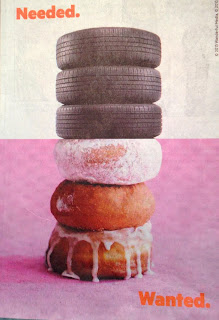 The image to the left is of an advertisement for the "Find & Save" shopping service. The image appeared in the print edition of the October 25, 2013 San Francisco Chronicle. Since I couldn't find the advertisement online, I had to take a picture of it.

I immediately liked the photo, when I first spotted it in the "Datebook" section, because the image recalled a discussion in the UCSC Legal Studies class I am teaching on "Law and Social Issues." A couple of weeks ago, the class discussed Roosevelt's "Four Freedoms," and after some spirited discussion, students went to the chalkboard to raise questions and make statements.

Here is the statement that the "Needed. Wanted." advertisement made me remember:

There will always be a conflict between capitalism and the 3rd Freedom (Freedom From Want) because greed will always make people desire more than they need.

Assuming that this comment is an accurate statement of how human beings behave in the real world (and it seems "spot on" to me), we do need to think about the consequences for our politics and society (and for the Natural World) of a system of government that is always trying to deliver "more."

My observation is that it would be great if we could actually make ourselves focus on goals and objectives in the order shown in the advertisement: First what's needed; then what's wanted.

Our politics mostly works the other way around.

We go for the doughnuts first.