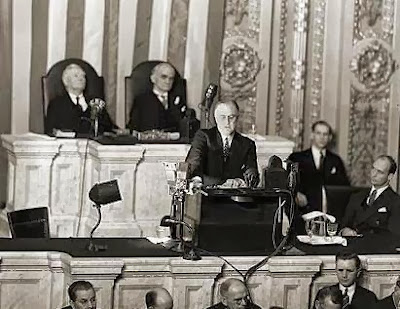 I have been teaching my UCSC class in Law and Social Issues about President Roosevelt's "Four Freedoms Speech." A Trudy Rubin column in the Wednesday, October 23rd San Jose Mercury News  confirmed, for me, the relevance of the analysis I presented to the class. In her column, focusing on events in Egypt, Rubin asks this question: "Should America still be trying to promote democracy abroad - especially when its own is so dysfunctional?"

President Roosevelt's 1941 State of the Union Speech is now known as his "Four Freedoms Speech." You can read a transcript by clicking on this link. You can hear an audio recording by clicking right here. The part of the State of the Union Speech devoted to the "Four Freedoms" is brief, but it is recognized as a triumph of political rhetoric. It is also, I would argue, a speech that marks a genuine turning point in American history. It is the moment, I think, when the United States government first claimed an official responsibility for promoting democracy "abroad."

In his speech, President Roosevelt said that the United States would "seek to make secure ... four essential human freedoms." He named them as freedom of speech and expression; freedom of every person to worship God in his or her own way; freedom from want; and freedom from fear.

The first two of these named freedoms derive directly from the First Amendment to the Constitution, and are at the foundation of American democracy. Every listener to the President's speech would have completely accepted the idea that our government should protect and ensure freedom of speech and freedom of worship, as among its central responsibilities.

Similarly, the President's call for "Freedom From Fear" would have reminded listeners of Roosevelt's stirring statement, in his First Inaugural, that "the only thing we have to fear is fear itself." The idea that our national government should ensure such a "Freedom From Fear," by standing ready to address any challenge to the nation and its people, was widely accepted. It is a measure of Roosevelt's political genius that he had been able, between 1932 and 1941, to have solidified an understanding of the role of our government that expanded its traditional role in assuring freedom of expression and freedom of worship, to vastly more extensive responsibilities for eliminating "fear" and for ensuring "Freedom From Want."

In short, President Roosevelt's articulation of the "Four Freedoms" in his 1941 State of the Union Speech would have rung true with the Congress, and with the American people, as a fair description of the responsibilities of American government to its citizens, as citizens had come to understand those responsibilities in 1941. This understanding, extending governmental responsibilities far beyond securing  the freedoms encapsulated in the Constitution and the Bill of Rights, represented an historic expansion of our understanding of what our government is actually supposed to do. Roosevelt, however, went even further than this, and the fact that he did go further is what makes the "Four Freedoms Speech" such an important turning point in American history.

In outlining the "Four Freedoms" in his State of the Union speech, the President took for granted that his claim that the United States government should ensure these freedoms would be admitted as true by Congress and the American people. But Roosevelt said something more, because he said that the United States (and its government) should take responsibility for ensuring these freedoms "everywhere in the world."

Later on in 1941, the United States entered World War II. Since that time, the American government has claimed (and with the general approval of the American people) that President Roosevelt was right, and that the obligations of the government are properly outlined by the "Four Freedoms Speech," and that this means that the United States government is supposed to "secure" the "Four Freedoms" everywhere in the world.

In the service of this assumed obligation, the United States government has extended its military power to every part of the globe, and has asserted and exercises the right to kill, without trial or due process, any person that the President determines is a threat to "freedom." In addition, the United States government, again in service of its assumed responsibility to guarantee the "Four Freedoms" worldwide, has now abolished the idea that the citizens of the United States should be "secure in their persons, houses, papers, and effects," as the Fourth Amendment seems to guarantee, all in the name of "national security" and our national obligation to act as a guarantor of the "Four Freedoms" around the world.

I have always admired President Roosevelt, and have appreciated what he was able to do for this nation. But Trudy Rubin is right to ask:

Should America still be trying to promote democracy abroad - especially when its own is so dysfunctional?