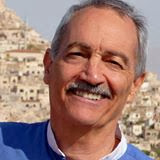 Karl Schonborn, a friend from my days at Palo Alto High School (and actually before that, because we were both students at Jordan Junior High School, too), has just published a memoir.

Karl taught sociology at California State University, East Bay, and now appears on the "retired" listing on the school's website. I last saw Karl in person at my 50th High School Reunion, a couple of years ago, and he told me then that this book was on its way. Now it's here.

Karl's book (not his first) is called Cleft Heart: Chasing Normal. I greatly enjoyed it, and I think people who didn't know Karl from grade school days on would probably like it, too. Here is a little blurb from Karl's website, to give you an idea of what this book is about:

Schonborn’s latest, Cleft Heart, follows a kid with birth defects who realizes his wildest dreams as a young man…only to be confronted by his scariest nightmares as a young adult.

Bullied for his unintelligible speech—though not by his father like Prince Albert in “The Kings Speech“—Schonborn becomes a star debater in school and college but soon has to race half way around the world to fight for his girl. He has put himself on the line before–in New York City and other places–to follow his dreams. And these tests prepare him for the greatest challenge of his life–cracking the mystery of the tragic violence that befalls his family. He unravels the mystery, in part, to give himself the normal life he’s wanted ever since he was a kid.

A true, yet inspirational, coming-of-age story. Not a medical misery memoir by any stretch, Cleft Heart: Chasing Normal is also a love story. A story about the love of a mother for her son, the love of that son for one of the few girls who’s ever truly accepted him, and the love of life that propels the young man through searing challenges.

I didn't know Karl well during the period surveyed in his memoir (and I haven't been close to him since that time, either). I certainly didn't know Karl's story (which is an interesting story).

What struck me most in Cleft Heart: Chasing Normal, and maybe because I do know Karl, at least a little, is the way that Karl's story conveys the kind of grandeur that resides in each one of our lives, and the immense significance of life itself.

We are so privileged to have had a chance to be alive - to have lived our lives,  even the very hard lives that many of us have confronted. Cleft Heart: Chasing Normal is a "coming of age" story. It ends in Karl's mid-twenties, just as he marries. It tells the story of a life charged with difficulty from the very instant of Karl's birth, but it does not come across as a story that applies only to those who are born with a significant birth defect.

Again, maybe it is because I lived in the same places that feature in Karl's story that the story seems a familiar one to me. It's not my story, but it's enough like my own story that I can recognize my own life in the story Karl tells. And what I take away is this (in the words of Ugo Betti):

Everyone has, inside himself ... what shall I call it? A piece of good news! Everyone is ... a very great, very important character! Yes, that's what we have to tell them up there! Every man must be persuaded - even if he is in rags - that he's immensely, immensely important!