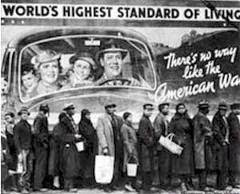 The United States Supreme Court has said, officially, that "money talks." In fact, in Citizens United v. Federal Election Commission, the Court has essentially held that money IS talk. Campaign contribution restrictions on corporations were found to be unconstitutional on the basis that spending money to voice political opinions is just the kind of "political speech" that is protected by the First Amendment, and so any such restriction would interfere with the corporations' First Amendment "Free Speech" rights.

This term, the Supreme Court is revisiting the issue, in the case of McCutcheon v. Federal Election Commission. The Wall Street Journal is delighted that the Court is getting back into this question, and trumpets what The Journal believes is the Court's "splendid opportunity to restore the First Amendment as a bulwark of free political speech."

Campaign donors are currently limited to contributing $5,200 to a single candidate, in each election cycle, but there is an "aggregate" campaign contribution limit, too. That aggregate limit is what is under attack in McCutcheon. Under current law, when a donor reaches the aggregate limit in an election cycle, no more spending is allowed. But if money IS speech, then this aggregate limit seems to be a direct restriction on speech itself. That's how it seems to The Wall Street Journal, at least. The Journal doesn't seem to care that the vast majority of people cannot afford to contribute anything like $123,200 in an election cycle, which is the amount of the current aggregate limit, and that if individuals and corporations can spend even more than that, the voices of ordinary people are certainly going to be drowned out, even more than they already are.

What about the free speech rights of ordinary people? Check the image above to "get the picture!" We are a "great country," alright, but mainly for the wealthy, and it really doesn't seem to be "free speech" per se that The Wall Street Journal cares about, but the rights of the rich.

Bob Dylan, as he so often does, has an appropriate observation: