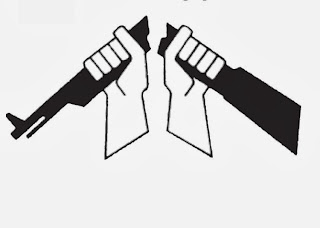 The War Resister's League will celebrate its 90th anniversary this year, on October 19th. The latest edition of their magazine, WIN, has some engaging articles on the organizational history of the WRL, starting at the beginning:

I became a member of the WRL around 1967, when I decided to resist not only the War in Vietnam, but the whole idea of conscription itself. Then, as now, the Democratic Party was beating the drums of war, making it hard for "progressive" types to feel at home in American politics. WIN's 90th Anniversary Issue makes that situation clear. It seems like it has ever been thus:

In the November-December 1954 issue of WRL News Bayard Rustin, then WRL Program Director, wrote an article titled "Can We Stop Conscription?"  In it, Rustin explains and analyzes different government proposals for U.S. conscription. He criticizes the militarist orientation of the Democratic Party and lays out the task for pacifists: "Pacifists must logically oppose the whole conscription system. That means going much farther than opposition only to Universal Military Training or to the more unpopular aspects of conscription. We must go to the core of the problem and fight the military system as such."

Today, largely because of the success of antiwar actions in the 1960's and the 1970's, the U.S. military system has gone "private market." There is no real "conscription" anymore, just a volunteer (and mercenary) army to advance what those in charge continue to call our "national interest."

More than ever, we need to end the "military system as such." If you don't think that's "realistic," consider the alternatives!

Check out The Atlantic "In Focus" series I linked to yesterday. It shouldn't have to take another 90 years to eliminate the destruction of what is literally our human "civilization." In fact, time is short. I don't think our civilization is going to withstand the modern "military system" for very much longer. To quote Mr. Dylan (out of context, but to the point), "we better cut it out quick."

Isn't that what our real "national interest" demands?