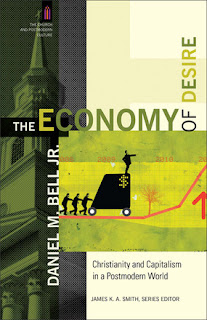 The Catholic Worker newspaper isn't published online, so I can't give you an easy link to their review of The Economy of Desire. That review, by Jake Olzen, just appeared in the August-September, 2013 edition. It was a good review; at least, I thought so.

If you want to read the book, you can just click on the image, to find out how to order it. If you want to read Olzen's review, I can give you some information on how you can subscribe to The Catholic Worker. I do recommend that! Just click right here.

It turns out that Jake Olzen is affiliated with a group called Waging Nonviolence, which subtitles its website with this description: "People-Powered News & Analysis." Having just saluted the work done by Gene Sharp on "realistic nonviolence," it must be that I am particularly receptive at this moment to broadcasts on the "nonviolent" wavelength. I am signing up for the Waging Nonviolence Email Newsletter, so I can continue to get these bulletins.

As for The Economy of Desire, the review gives me the impression that the book finds desire itself to be good, but says that its diversion into the capitalist marketplace is even more than a mere "diversion." Maybe it's more like another one of those "-ion" words: "perversion."

Turning humans into consumers, and communications into advertising (about which I have complained before) is the way we separate ourselves from the source of our authenticity. The review quotes Saint Augustine to that effect.

My favorite interpreter of the realities of this world wrote a whole song about St. Augustine. He titled one of his albums Desire. And as for the perversions wrought on our souls by advertising, this is what Mr. Dylan has to say: