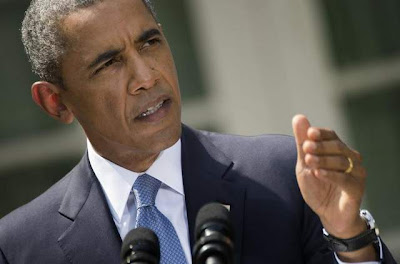 On August 28th, I said that our President should seek approval from the United States Congress before launching an attack on Syria in the name of the American people. On August 31st, he made a commitment to do just that.

In his statement on Syria, the President explicitly said:

[I am] mindful that I’m the President of the world’s oldest constitutional democracy. I’ve long believed that our power is rooted not just in our military might, but in our example as a government of the people, by the people, and for the people. And that’s why ...  I will seek authorization for the use of force from the American people’s representatives in Congress.

So what has been the reaction of the "pundits" to the President's statement that he believes that our system of democratic self-government requires the approval of the elected representatives of the people before he, as Commander in Chief, starts killing other people in our name?

Has the President been praised for recognizing what the Constitution requires? No. Quite the contrary - though with one exception, in Mother Jones.

The President's action has been denominated "indecision" in a headline over a column by Trudy Rubin of the Philadelphia Inquirer, as that column appeared in the print edition of the San Jose Mercury News on Thursday, September 5th. The Inquirer called it "dithering." The September 5th edition of The Wall Street Journal was filled with similar negative evaluations.

In essence, the "pundits" of this world seem to believe that whoever is the President should be able to commit the entire might of the United States military, anywhere in the world, based on the President's unilateral decision about what would be right for the country to do. I disagree. I endorse David Corn's comments in Mother Jones, who makes a compelling case in favor of the Constitution. If you do read the Constitution, you will come to the conclusion that the views expressed by most of the pundits do NOT represent what has been known as democracy.

I am not, personally, in favor of a United States attack on Syria, but I am particularly not supportive of any President's claim to be able to make such an attack, in my name, on a unilateral basis.

It will demonstrate that there is still some democracy left in the body politic of these United States. It will demonstrate that unilateral executive action in matters of war and peace will not be permitted in the United States, even though this is done elsewhere in the world, where "leaders" make life and death decisions affecting the people without ever asking the people whether they agree.

Those brave men and women who are fighting dictators around the world (including in Syria) might take heart from that.

I know I will.