#251 / An Argument Against Secrecy 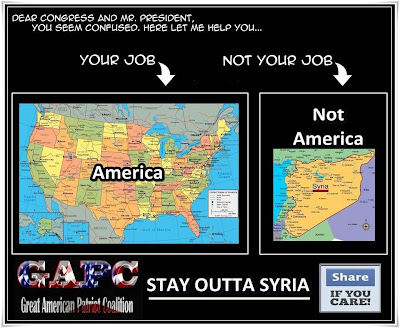 I like the graphic. It sums up my first reaction to the proposition that the United States should launch an attack on Syria, as our President has advocated. I realize that there are some potentially persuasive arguments on the other side. A comment by Steve Coll, titled "Crossing The Line," which appeared in the September 9, 2013 edition of The New Yorker, presents a thoughtful and low-key argument that it might be good for the United States to retaliate in some way for the use of poison gas by Syrian President Bashar al-Assad.

The Coll comment is based on the premise that it was Assad who did, in fact, use poison gas against civilians, a point that some (including the British Parliament) believe has not been adequately demonstrated by the facts made public to date.

Which brings me to United States Senator Dianne Feinstein, and the news story I read yesterday. Feinstein is a supporter (along with California's other United States Senator, Barbara Boxer) of the kind of "red line retaliation" that the President has asked our Congress to endorse. The justification advanced by Senator Feinstein, as revealed in a news article in the September 7, 2013 edition of the San Francisco Chronicle, is that she knows things that we don't know:

Feinstein spoke openly about public opposition in California. "It weighs on me, no question," Feinstein said. "Every day I get a report on the amount of calls, where they are coming from, what the nature of the argument is, and there is no question that what's coming in is overwhelmingly negative."

Still, she said, her constituents "have not seen what I have seen, or heard what I have heard...."

Maybe the Senator does know things that you and I (and other members of Congress) don't know, but why is that? That is because the United States government (with Dianne Feinstein in the vanguard) believes that "defense" issues should be "secret," and that the citizens who pay for the so-called "defense" of the United States, and whose lives and property are imperiled by its military adventures, should not be able to see what a privileged few (including Senator Feinstein) have seen, or to hear what those privileged few have heard.

If we intend to pay respect to the limitations of the United States Constitution, then there must be a Congressional debate before the President is authorized to use military force to kill other people, in other countries, in our name, and on the nation's behalf.

In this case, that includes not only Congress, but the people themselves, the people whom Congress represents.