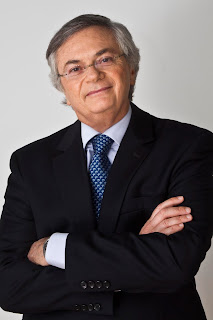 Pictured to the left is Moises Naim. He has written a book called The End of Power. Bill Clinton recommends it. At least, that is what Richard Cohen says in a recent column.

I haven't read Naim's book. I did read Cohen's review.

As far as I can tell from the review, based on the examples that Cohen cites, the "problem" that Naim is discussing isn't so much that there has been an "end" to power. The problem is that the elite "leaders" and traditional authority figures who have wielded power in the past can no longer simply tell people what to do, and expect them to do it. This "end of power" phenomenon is being experienced by nations, and presidents, and political party leaders, and corporate executives. Again, this is what I gather from Cohen's description.

The "leaders" and the elite have lost power, but the power hasn't "ended." It's moved.

Parents used to tell their children what to do, and if questioned "why," the parents' response was "because I say so."

According to Naim, per Cohen, this is "maybe the most poignant loss of power," the product of a "change in mentality."

Are you telling me that's bad?

I haven't read Naim's book. But from the examples provided in Cohen's review, I am not convinced that the "end of power" that Naim documents is such a bad thing.

What would be bad would be a failure by ordinary people to grab hold of, generate, and use the power that is always available to each one of us, and that can specifically be mobilized when we act together.

As for the elites and the "leaders," I'm not shedding any tears.