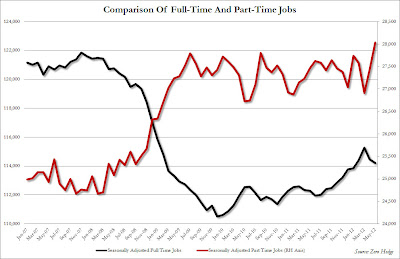 Robert J. Samuelson writes on economics for The Washington Post. In a recent column, he examined whether or not the relatively large amount of part-time job growth we are experiencing (as compared to full-time job growth) should be seen as a sign of a weak economy. Apparently, the chairman of U.S. News And World Report has drawn that conclusion.

Samuelson cites to the Bureau of Labor Statistics to make the point (not unlike the point made in The Rise of the Naked Economy) that many workers prefer part-time to full-time work. That kind of work, in other words, can have benefits for the workers, and the fact that there is greater growth in the number of part-time jobs, as compared to the number of full time jobs, should not automatically be assumed to demonstrate that workers are failing to get the full-time jobs they actually want.

Firms seek to minimize fixed labor costs by using contractors, “temps” and part-timers. Obamacare intensifies the pressures, because the incentives against hiring full-time workers are so obvious. A survey by the New York Federal Reserve of manufacturers in the state found that 6.5 percent had already refrained from hiring or had fired workers to stay below the 50-worker threshold; 5.4 percent said they had substituted some part-time for full-time workers. (These firms apparently represented a large share of the companies subject to the threshold, because most firms had more than 50 workers. The average firm employed 218.) A survey by the Philadelphia Federal Reserve produced a similar response.


Up to a point, part-time jobs reflect the flexibility of the U.S. economy — but we are well beyond that point. They increasingly signify weakness.

Today's job market is one in which corporate decision makers constantly seek to turn full time workers into "temps" and part-timers. The Forever 21 retail chain just did that in a big way, affecting workers in my hometown of Santa Cruz. As of the last part of August, it appears that all full time/non-management employees were demoted to part time, and they and their families will lose their health and dental benefits, and will no longer qualify for paid time off.

As individuals, we can try, as best we can, to be agile, and to realize individual "benefits" from the new "naked" economy that confronts us. That approach, however, doesn't seem to be a sustainable solution. A collective, as opposed to an individualistic, approach is what is needed. The wealth that our economy produces is not an "individual" achievement of the entrepreneurs and the business owners who like to claim credit. We all help create that wealth. We all should get a fair share.

To make that happen, we need to go beyond "individual" actions, and enter the political realm, because "politics" is how we really create the world we most directly inhabit.

Joe Hill got it right. We need to organize.