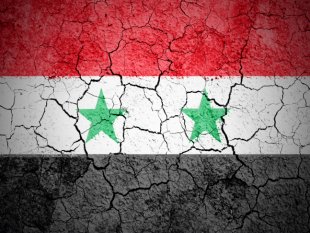 My consultation with an online dictionary tells me that "vignette" is "a small illustration or portrait photograph that fades into its background without a definite border." Above is the flag of Syria, "painted on cracked ground with vignette." This image (described as quoted) illustrates an article titled "4 of the Most Awful Arguments for Attacking Syria Made So Far." Click the link to read the article. You can also read another article, pretty much to the same effect, by clicking here.

I do not grant to any individual person, including any President, the right to go kill people in other countries, and to do it in my name.

I don't care how "good" or "bad" the arguments may be that the President, or the press, might muster. Unilateral decisions to go kill people in other countries are unjustified, and unjustifiable.

A decision that the United States government should go kill people in other countries cannot properly be taken without a PUBLIC ARGUMENT (however "good" or "bad"), carried out by the elected representatives of the people of the United States of America, in Congress assembled.

That's what the Constitution says, in Article I, Section 8. It is the Congress that has the power to declare war. Without Congressional authorization, no person, including any President, is given the right to go kill people in other countries.

And if our current President does that...
More than shame on him!

The people who established the foundational rules that limit the conduct and actions of our government must not let illegitimate actions stand.

Easy to say, I know, but I do not grant to any person, including any President, the right to go kill people in other countries, and to do it in my name.