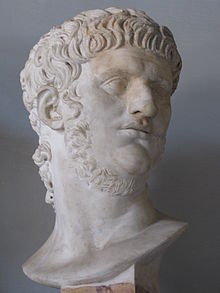 I couldn't find an image of Nero "fiddling," so you get this one. Nero, of course, is often identified as the Roman Emperor who "fiddled while Rome burned." Nero was Emperor at the time of a great fire in Rome, which some said he set himself. Whether or not that is true, and whether or not Nero played music as the city was engulfed in flames, is not actually known.

Meantime, moving to the present day, I just spotted a reference to Nero by one of my friends, Richard Charter, who has been working on coastal protection since the mid-1970s. Richard has been certified as a "coastal hero" by the Ocean Foundation. They got that right!

Commenting on the use of methane hydrates as a new fuel source, Richard was quoted as follows: "Hydrates, when and if they ever turn out to be commercially extractable, will be just one more excuse to fiddle while Rome burns." Richard's thoughts appeared in an article in the The Wall Street Journal published on July 28th. The Journal also ran a more extensive article, with a more positive assessment on methane hydrates, which had the following title in the print edition: "Fracking Dreams of a New Ice Age." The quoted title was ironic. Methane hydrates, which are currently frozen, and buried deep in the earth, are seen by some as a potential a fuel source. Fire from ice, in other words.

Many people do not know about methane hydrates. It's worth reading up on the subject. As a potential fuel source, methane hydrates might provide one more way to burn a hydrocarbon-based fuel. As Richard Charter noted, that is contraindicated in this time of global warming. We need to focus on energy sources that don't involve burning hydrocarbons.

The truly scary possibility is that the "frozen" form of methane hydrates might become "unfrozen," by an accident associated with energy production, as discussed in the article I have referenced, or without any specific accident at all, as the world warms up. If the methane gas contained in the methane hydrate deposits found throughout the world were ever to be released to the atmosphere, it would be "game over" with respect to our efforts to stop massive global warming.

Rome, and most everywhere else, would likely go up in flames.