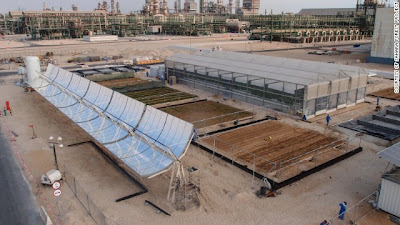 Pictured is an experimental solar-powered desalination plant, coupled with a greenhouse to grow plants. All this in the scorching desert of Qatar. The project is billed as the "Sahara Forest Project." Click the link, to a CNN website, if you would like to read about it.

My philosophical bias is to favor the use of our intelligence and science to live "within" the World of Nature. As I see it, the world we create through human action - our "political" world, and a world that we can and do redesign, constantly - is ultimately dependent upon the Natural World. We can't, actually, redesign the Natural World. The laws of the Natural World, unlike our own laws, are absolutes. Given this truth, my view is that we should respect the limits of our natural environment, and learn to live within the World of Nature. The temptation, however, is always to think (since humans can do virtually "anything" within the human world) that the World of Nature can likewise be manipulated and transformed as we may decide.

The local version of desalination (the proposed desalination plant in Santa Cruz, California) represents an effort to "manufacture water," as opposed to an effort to find a way to live within the limits of our natural water supplies.

I have been reading the Draft Environmental Impact Report on the proposed desalination project, and that report makes clear that the "objective" of the proposed project is to "provide a supplemental water supply." The City of Santa Cruz, in other words, is not trying to find a way to "meet the water needs of the community in a time of drought." That would actually be a different objective, and one that could be accomplished in a number of different ways.

Instead of defining its proposed project in those terms, the City states that its "objective" is to "make more water." That's what providing a "supplemental water supply" means. The City, in other words, has taken off the table, by the way it defines its objectives, any alternatives to desalination. It's a kind of "legal trick," and the City is getting called on it. Local residents aren't much confused about what's happening. The fact that the City is contributing ratepayer money to a pro-desal industry lobbying group, and that the City Water Director is an officer of this lobbying group, helps underscore the City's agenda, which (like CalDesal, the lobbying group) is "solely" devoted to advancing desalination. It's just too bad that the desal agenda requires using massive amounts of electrical energy (helping to advance global warming), and that the reverse osmosis desalination process puts marine resources at risk.

So far, the City has spent about $17 million dollars pursuing desalination, and now that it's clear that there might well be an election on the issue, at the very time when pro-desal public officials are running for office, there are efforts to delay the decision, to "study" it some more. I don't think that this bald attempt to avoid political responsibility for past City decisions is going to fool anyone, either.

But what about the Sahara Forest Project?

If I understand it correctly, the desalination project in Qatar does not use an energy intensive "reverse osmosis" process to manufacture fresh water, like the proposed Santa Cruz plant. Instead, it uses solar power, located onsite, and relies on natural processes to provide the fresh water.

I think it's too early to judge whether the Sahara Forest Project is "too good to be true," as some opine, or whether it's a "game changer," as others hope.

But it's not "manufacturing water," at least the way I understand it, and that's a plus!