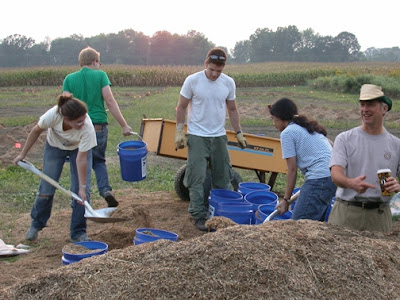 I was elected to the Santa Cruz County Board of Supervisors in 1974, and I quickly found that the people I represented were interested in having their county government "preserve and protect" the natural environment. That was the language used, and that was more or less the focus of my efforts as a local elected official.

I tried to carry out that "preserve and protect" assignment by getting the Board to establish "limits" on various kinds of human activities, thus preserving and protecting the part of the natural environment given special recognition through the limits established. Most notably, I think, I wrote Measure J, a referendum measure enacted by the voters of Santa Cruz County in June 1978.

At least from my point of view, the lines we drew have had a positive impact, not only by preserving and protecting agricultural land and the natural environment, but also by directing our economic and development activities into the urban areas where communities can be benefitted by such new development. The ideas that underlie Measure J have come to be called "smart growth."

As I said in my blog posting yesterday, I think it is important to think "inside the box," when it comes to thinking about what activities we should permit ourselves. Setting limits on human activities is a great way to "preserve and protect" the Natural World.

"Preserve and protect," however, is not enough. Somewhere along the way (Wikipedia says it was in the 1980's), those who called themselves "environmentalists" began to see that regulatory or other techniques to preserve and protect the natural environment, by establishing "limits" beyond which we would not go, was not enough. Put in simple terms, it is clear that human activities have already screwed up the natural environment to the extent that simply "preserving and protecting" portions of what is left will not be sufficient.

I think I first heard the term "restoration ecology" in a speech by David Brower, but our current assignment is now, clearly, to "preserve, protect, and restore" the World of Nature. That "restore" component is what "restoration ecology" is all about. It is a major focus of environmental education at the current time. Click the image or the image credit link to learn something about the current efforts at Ohio State University.

I like the picture at the head of this posting. You know why? Because there are a lot of young people working, in what is being shown as an illustration of what "restoration ecology" actually means.  Our society needs good jobs, more than almost anything else. We need jobs with a purpose; jobs that improve our world and that benefit both individuals and society at large.

Our new assignment (for a new generation)? I don't really think it's to invent some new high-tech reality. It is to think inside that "box of nature" in which we truly live, and to restore the Natural World upon which our human civilization is ultimately dependent.

There is a lot of work to do!