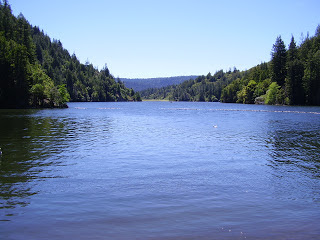 Family schedules being what they are, my family provided me with a celebratory Father's Day dinner on Saturday, just one day in advance of the "official" Father's Day.

My daughter Sonya (and her children) wrapped up some coffee beans, and some of those beans were themselves wrapped up in chocolate. This was definitely a hit as a Father's Day gift. Unlike the young boy in Wales, made famous by Dylan Thomas (or who was, perhaps, Dylan Thomas himself), I tend to like the "useful" gifts. Though I am far from her father, my wife, Marilyn, provided me with a gift of three white shirts. VERY useful. Another hit in the gift department.

My son Philips came to dinner with a book - another good gift choice for this particular father. The book in question was Dave Eggers' most recent novel, A Hologram For The King.  Sometime ago, having read a review, I made a kind of promise to myself to read the book. This quasi-commitment was noted, in fact, in this Two Worlds blog, as you can see if you click the link. Today, the day after Father's Day, I am already about half done. The book is as good as the reviews opined!

That day with my kids was the REAL gift!

Loch Lomond is as pretty as the picture shows. And as I have also noted before, this is water, destined for drinking, that doesn't get run through a huge, energy-sucking, marine-environment-destroying desalination plant. It was nice to see our city's water in its natural element. It was a really nice Father's Day for me.

So happy just to be alive, underneath the sky of blue!