#156 / The Categorical Imperative One More Time 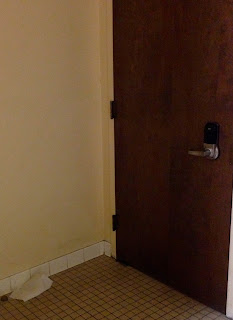 I have been writing daily entries in this Two Worlds blog since January 2010, and the categorical imperative, which is sometimes called "The Golden Rule," has been a frequent topic of my reflections.

In April 2010, I wrote about the categorical imperative in connection with my fond recollections of A.J. Muste. About a year later, in May 2011, I talked more specifically about what the Bible says. In December 2012, I wrote about the somewhat inelegant phrasing of the Golden Rule now current among the entrepreneurial set: "Eat your own dog food." Most recently, I returned to the topic, in a posting I made on May 10th, discussing Kant's formulation of the categorical imperative, and giving it a bit of a twist.

Maybe I have been thinking about the categorical imperative too much (if that is even possible), since it was the categorical imperative that immediately came to mind after I made a recent visit to the restroom facilities in the office building in which I work. My visit to the restroom provided me with a splendid example and illustration of exactly how Kant's formulation might work out in practice, in a very ordinary context. Remember, Kant said this:

You must "act only in accordance with that maxim through which you can at the same time will that it become a universal law."

So, check this out: the picture above documents the visit that put the categorical imperative back into my mind. The door leads from the restroom to the hallway, and the discarded paper towel that is shown (or a similar one) is often found thrown on the floor just where it is pictured.

Presumably, someone who uses the restroom facilities believes that it is better for health and hygiene to avoid a flesh to metal contact with the door handle, and carries a paper towel to the door to insulate his hand from any such interaction. Then, instead of taking the towel with him as he leaves the facilities, he simply throws it on the floor. As I say, I see a towel there frequently. Just one. I am hypothesizing how the towel gets there, but I bet I am right, and while I don't particularly share a fear of the germs that might be found on door handles, I have no bones to pick with people who do, and who want to insulate themselves from a potentially germ ridden contact.

But...why not take the towel with you when you leave, and dispose of it in a wastepaper basket or trash bin? Why throw it on the floor? What about that categorical imperative? Are you really prepared to suggest that your practice should become "a universal law?" 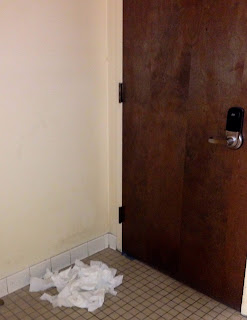 This is a homely example of an important principle of human life and conduct.

I doubt anyone wants to have to slog through an accumulation of used paper towels on the way into or out of a restroom.

Whether it's Kant, Jesus, the entrepreneurs of Silicon Valley or A.J. Muste, the rule applies, and the rule is a good one (in every circumstance). Even in deciding how to get out of a restroom germ free.

So simple. So important: