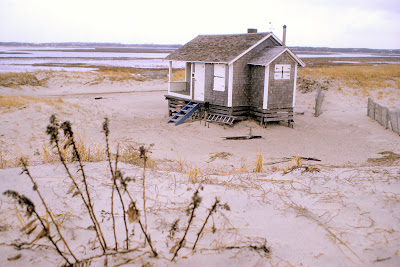 It is the privilege of the naturalist to concern himself with a world whose greater manifestations remain above and beyond the violences of men. Whatever comes to pass in our human world, there is not shadow of us cast upon the rising of the sun, no pause in the flowing of the winds or halt in the long rhythms of the breakers hastening ashore ... At the Coast Guard Station there are new activities and new faces, and the visitor will find there sons of the very men mentioned in this book. With such changes, however, the dune world is not concerned. In that hollow of space and brightness, in that ceaseless travail of wind and sand and ocean, the world one sees is still the world unharassed of man...

The Henry Beston Society has a map available, documenting "where Henry Beston’s famous beachside shanty was located when it was built in 1925, and where that location is today." Or, you can consult Google Maps, typing "Eastham, MA" into the search field. It seems, despite Beston's hopeful thoughts in 1949, that the things that we have done in our "human world" have, in fact, made changes in the natural world that do not allow us to believe that the World of Nature will endure, always, "unharassed of man." 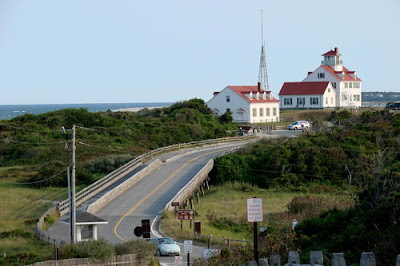 The picture above is particularly poignant when it is compared against Beston's description of his walks inland from the coast. No expressways are mentioned.

If you believe, as I do, that what we are doing in our "human world" is not only "harassing" the World of Nature, but is undermining the ability of the World of Nature to sustain and support our "human world" itself, then you can also consult the "timelapse" website that Google has recently released, showing human caused changes to Nature for the period from 1984 to 2012.

Read the book first. Then do that. This is an exercise that may convince you that there is not much time left.