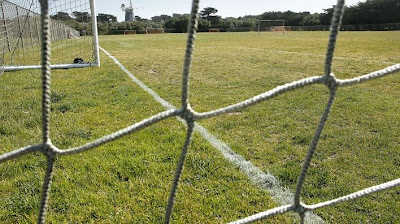 Today, the California Coastal Commission is going to consider a proposal by the City of San Francisco to convert some existing soccer fields in Golden Gate Park from natural to artificial turf. Other changes are proposed, as well. You can read the staff report by clicking the link, if you are interested.

An article published last week in the San Francisco Chronicle indicates that there is going to be some controversy about the staff recommendation, which is that the Commission reject the proposal to install artificial turf because (in the words of the article) it "violates the 'naturalistic landscape' of Golden Gate Park."

Since I am always wary of human efforts to substitute human-created realities for the realities of the natural world (for instance, by installing plastic, artificial grass in place of real grass), my initial reaction to the staff recommendation is positive. Real nature, as opposed to artificial nature, should definitely be preferred in the Coastal Zone, in my opinion. In fact, I think the natural world should almost always be preferred over artificial substitutes anywhere!

The staff report doesn't, actually, base its recommendation on a philosophical preference for "natural" over "artificial" substitutes. In fact, the City's own Local Coastal Program requires that developments in Golden Gate Park "emphasize the naturalistic landscape qualities of the western end of the park for visitor use.”

All the Coastal Commission staff is actually saying is that the City should follow its own guidelines!