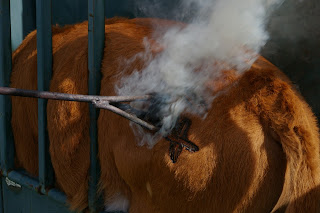 As my friend Mr. Dylan might say, though, "things have changed."A recent edition of the SmartBrief bulletin, published by the International City/County Management Association (ICMA), advises local government leaders to "polish their personal brand," i.e., to "promote themselves," and to turn themselves into a commodity and then push that commodity.

I am going to resist this impulse to try to achieve personal power by personal "branding" - and not just because I am not an official governmental leader anymore. Turning oneself into a branded commodity, like a popular cereal, and then "promoting" that commodity, is not my idea of leadership, and it is not my idea of how human beings can realize their full potential.

Furthermore, even self-inflicted wounds can hurt!