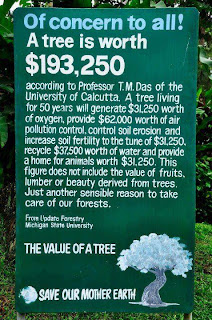 The City of Santa Cruz has a "Heritage Tree Ordinance." You can click the link if you'd like to review its provisions.

Most City residents undoubtedly assume (as I certainly did, until recently) that the purpose of the City's ordinance is to protect and preserve "heritage trees," which are defined as trees which are more than 14" DBH (diameter at breast height). I also assumed that the ordinance was, in fact, achieving this purpose, and that the City was, by and large, protecting the large trees that have so much value to us - economic value as well as "emotional" value.

Alas, this is not, in fact, the case. A "tree activist" recently told me that she had asked for City records, and that the City's records show that of about 2,500 applications to remove heritage trees, during the last ten years or so, about 2,250 were approved.

Bad news if you agree with the sign pictured to the left. Worse news: the City Council will soon be getting a proposal from its staff to weaken the Heritage Tree Ordinance further, to permit even more cutting of big trees. If you are a Santa Cruz City resident, you might keep your eyes and ears open, so you can present your views to the City Council at the appropriate time.

Meanwhile, what is going on in Santa Cruz, with respect to the destruction of its big trees, provides additional evidence of a political truth illuminated by George Orwell. In his novel, 1984, and in a number of his other writings, Orwell tell us that language can be used to mislead, as well as to disclose. We need to be careful about assumptions we import into our understanding of the world, when we fall victim to words that have been  deliberately chosen to mislead us.

What's in a name? Maybe a major deception. A "Heritage Tree Ordinance" that facilitates the extirpation of large trees is a great example of the phenomenon. So is "the Defense Department."

Pictured below are trees still standing, as of today's date, but which are slated for destruction under the City's "Heritage Trees Ordinance." They are right in the heart of downtown Santa Cruz. 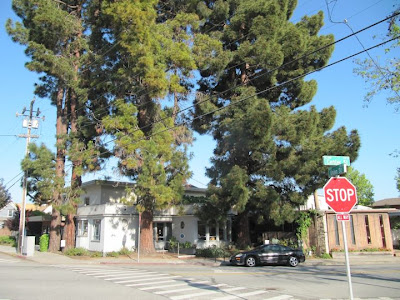 Look closely: it's a four-way STOP, and there are four trees, pictured, that are about to die, unless someone appeals to the City Council, and the Council heeds that appeal, and actually protects these living parts of the heritage of our city.