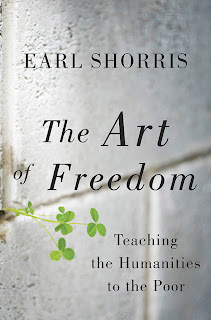 The Wall Street Journal has just published a review of Earl Shorris' book, The Art of Freedom. Another review, which I found yesterday,  was published in the New Republic. Both reviews are worth reading, and they make me believe (as good reviews should, I guess) that I had better confront Shorris' book directly.

Shorris died in May of last year, and The Art of Freedom was published posthumously.

Not having yet read the book, I can only quote from the reviews. In the review published in The Wall Street Journal, Shorris quotes a  woman incarcerated at New York's Bedford Hills maximum-security prison. When asked by Shorris why she thought the poor were poor, the woman replied, "Because they don't have the moral life of downtown."

This prisoner presented to Shorris the thesis that the poor were poor because of an inadequate exposure to what the academic world calls "the humanities." Her claim has spawned an educational experiment still going strong, The Clemente Course in the Humanities.

Finding out more about that educational effort seems advisable, as we experience a decline in the ability of our civilization to maintain even the basic rudiments of what we think of as "civilized behavior." (You don't blow up bombs in the middle of crowds, as one for instance).

Asking the question, "What Would Socrates Do?" is probably also good advice for anyone. Rich, poor, or whatever your circumstances. Even those who did take classes in the humanities are probably due for a refresher course.