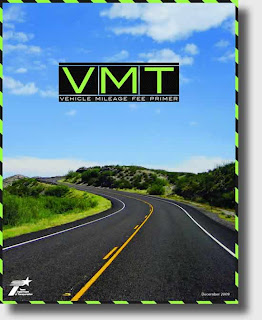 Here is an idea that is not going anywhere. It's a good idea, though; at least I think it is a good idea.

We are beginning to understand that our human-built world is having an ever greater impact on the World of Nature, and that our human civilization (and perhaps even our continued existence as a species) is ultimately dependent on the natural world. One way that this is becoming manifest is through our observations of climate change, reflecting the human-caused global warming that is clearly underway, here on Planet Earth. To control global warming, we need to reduce human-generated carbon emissions to the atmosphere. In fact, we need to do it very quickly, too!

Since about 40% of the carbon emissions released in the State of California come from the "transportation" sector (read from our cars), we need to reduce the carbon impact of our driving. In fact, we need to do it very quickly, too!

I attended a conference in Sacramento last week, put on by the UC Davis School of Law Environmental Law Society. The conference was entitled, "California Public Transportation: Are We Moving Forward?" One of the speakers, Ethan Elkind, a Bank of America Climate Policy Associate at the UC Berkeley Law School, and a frequent contributor to a very nice blog, Legal Planet, pointed out that there are, essentially, three strategies for reducing carbon emissions from our cars. First, we can reduce the "carbon intensity" of the fuels we use to power our cars. Second, we can make our cars more fuel efficient. Third, we can drive fewer miles. The currently popular buzzword for achieving the last goal in this list is reducing "VMT," or vehicle miles traveled. According to Elkind (he's right), we can't do what we need to do to reduce carbon emissions related to transportation simply by improving fuel efficiency and by changing the carbon composition of our fuel stocks. Both these steps are essential, but they are not sufficient. We need to stop driving so much. We need to reduce our VMT, and we need to do it very quickly, too!

There could be a direct regulatory approach to controlling VMT. For instance, we could decide that those cars which have "even" license plate numbers could be driven only on "even" dates. We actually tried a system like this, with respect to gasoline purchases, during the energy crisis of the 1970's. This is a directly regulatory and non "market" system that would be resisted. How about a "market" solution? In the arena of water conservation, various communities have derived pricing schemes that provide a certain "baseline" allocation of water to everyone, and then make those who use more than the baseline pay more, on a scale that increases the more you use. What if we tried that with VMT? If every automobile were provided with an initial VMT allocation, and then the automobile owner was charged a rather HIGH additional cost for every mile over that base VMT allowance, people could decide to reduce their VMT (by carpooling, for instance, or taking transit) on the basis they decide themselves, driven by the market mechanism of price avoidance.

Is this a good idea? Well, it could be. As discussed at the conference, though, the current plan is to provide only "carrots" for reducing VMT, not "sticks," and those carrots aren't really all that compelling.

My question is this: are we serious about reducing VMT? We ought to be, and if we are, we had better start putting a lot of carrots and sticks in play, and they had better be strong inducements and strong penalties. We need to do it very quickly, too!