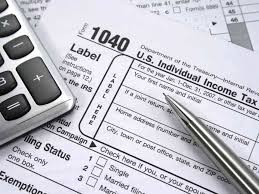 My father liked to pay his federal income taxes. That's right, or at least that is how I remember it. Completing the family 1040 was a big deal, when I was growing up. My father's office was just past the family room, and inside a room that had a pool table installed, and that had a set of big, floor-length picture windows facing out to a swimming pool. I remember the chug-a-chug whirr of the paper tape adding machine, and the brown ceramic jar that held the entire year's tangle of sales tax receipts, which my father had carefully husbanded all year, and then added up as he prepared his return, so he could qualify for the (then available) state and local sales tax deduction.

That "happy to help my country" feeling that accompanied my father's preparations to pay his income taxes carried over to me. Until recently, that is.

I have been pretty lucky in my life, including having always been in a pretty good financial situation (with much of the credit for that going to my hard working wife, Marilyn), and I still think, like my father taught me, that it's right to contribute. I am still  happy to do that, too, when I can put myself in the right frame of mind. But I am finding it ever more difficult to get into that good state of mind about the tax payments we make, since it is galling to realize that (1) we are largely living on borrowed money, which my children and grandchildren are going to have to pay off; (2) about half the taxes we pay are going to fund the military, in one form or another, and (3) that our tax payments are helping to perpetuate a state of American imperialism and permanent war that makes George Orwell's 1984 seem like a piece of descriptive journalism instead of a novel.

Plus, I am becoming painfully aware that there are a lot of people (and corporations) that are paying a whole lot less than they could, and should, while profiting exorbitantly. Recent financial events in the United States have made me understand that we are (indeed) the 99%, and that the benefits of our contributions are disproportionately being distributed to the 1%.

I'll feel better about paying my taxes, again, when the country is run for the benefit of, and in response to, the majority of those who are actually paying the taxes.

Until then, I am simply not going to be able to like paying my taxes, in the way my father did (and in the way I used to). A lot of joy has gone out of my annual encounter with Form 1040.