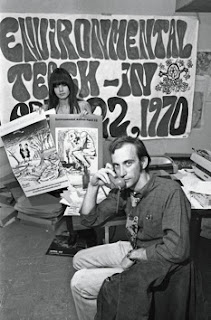 The person with the phone is almost certainly Dennis Hayes (in earlier days). He was one of the main organizers of the first Earth Day, held on April 22nd in 1970.

The picture comes from an article by Nicholas Lemann, published in the April 15, 2013 edition of The New Yorker. That article, entitled "When The Earth Moved," compares the 1970 first edition of Earth Day with more recent Earth Day efforts. The comparison is quite unfavorable to our current Earth Day endeavors.

Since Earth Day 2013 is coming up, in just over a week, it is a good time to think about what has gone wrong in the environmental movement. In Lemann's view, environmentalism has moved from a grassroots, democratic movement to an "insider" ballgame played by organizations like the Environmental Defense Fund and the Natural Resources Defense Council, both closely tied to, and funded by, corporate interests.

What Lemann says about Earth Day can be said about our politics in general.

Democratic self-government means that we (tens and hundreds of thousands of us) need to get directly involved ourselves.