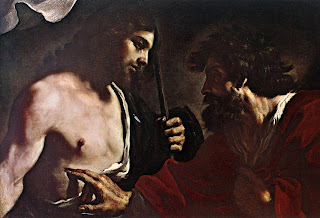 In the Gospel according to John, the story is told of a disciple named Didymus (and also called Thomas) who was not with the other disciples when Jesus appeared to them after the Resurrection. The other disciples told Thomas that they had seen Jesus risen from the dead, but Thomas was not convinced. He said, "except I shall see in his hands the print of the nails, and put my finger into the print of the nails, and thrust my hand into his side, I will not believe (John 20: 24-29)."

Richard Dawkins, definitely more than a "doubter" where religious questions are involved, calls Thomas the "patron saint of scientists." Of course, if you believe the Bible, Thomas' researches turned out to verify the truth of what he had been told by his friends. Nonetheless, while I am sure Dawkins' respect for the methodological approaches demanded by Thomas are sincere, Dawkins has not professed a belief in the divinity of Jesus, or that Jesus rose from the dead. The "scientific" report from Thomas has not been enough.

I tend to be willing to base my beliefs on "theory" as much as "experience," and am therefore not of that "scientific" persuasion that Dawkins thinks is so important. But I am fine with experience, too.

Questions about the divinity of Jesus aside, I have found that my "ideas" about reality often turn out to be correct, or that I can "make" them correct, because we create human realities based on the beliefs we have, and upon our willingness to act upon those beliefs. Since we do, actually, create our own reality, within the human world, our ideas about what we want reality to be can be more important than a "scientific" review of the apparent realities around us.

That's my idea, anyway. Or as my father put it, "unless you have a dream, Gary, you can't have a dream come true."