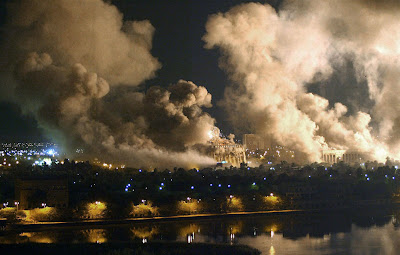 The Atlantic publishes online pictures two to three times a week, in a feature they call In Focus. Very often, the images published are both striking and powerful. The image above comes from an In Focus series on "Iraq War's 10th Anniversary: The Invasion." The other photos in this series are equally powerful and dramatic.

My wife, and I, and tens of thousands of others, marched in the streets of New York City, just days before President Bush ordered the invasion of Iraq. We were protesting this proposed war, but our protests were unavailing. A war against Iraq was carried out in our name, and to our enduring shame.

Whether we protested or didn't, the credit for the invasion and war goes to the United States of America. To all of us. Click on the link to see our handiwork.