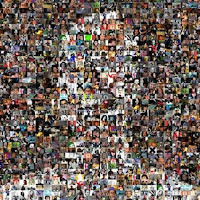 "Social Media," with Facebook being a prime example, promote human connections and interactions. I have found that a frequent question, particularly one raised by those who are not themselves active on the social media, is whether the connections and interactions that come from the social media are "real." The image here is from an article with this headline: "NEWSFLASH! Your Favorite Facebook Friend Could Be A FAKE..."

So are those Facebook friends my "real" friends or "fake" friends?

I approach this question from a background that is somewhat different from the background of many people. When I was twenty-nine years old, I was elected to the Santa Cruz County Board of Supervisors, and for twenty years thereafter I served as the elected representative of the residents of the Third Supervisorial District. By virtue of my position as their elected representative, I  was officially connected to about 45,000 people in the Third Supervisorial District, and to about 200,000 people in Santa Cruz County. I always thought that every one of them had a claim on me, and that my connection to them was definitely "real," though I certainly didn't know them all, personally.

I have pretty much the same kind of feeling about my Facebook Friends, now numbering about 1744 "Friends," according to the account that appears on my Facebook page. These "Facebook Friends" aren't all people I know personally, but they all have some sort of connection with me - at least that is the way I think about it. Usually, if I don't know them personally, they are residents of the Monterey Bay Area, and they obviously know who I am (since they asked to be "Friends"). I assume that the "Friends" that I don't know personally have become aware of me because of my past service on the Board of Supervisors, or because they know of me through my work for LandWatch, in Monterey County, or because I am on public radio, each weekday morning, on the KUSP Land Use Report.

I think these kinds of connections are "real," and if I can refer to that "unit of analysis" topic that I have discussed in an earlier posting, it is my opinion that we are making a mistake if we assume that the "real" unit of analysis is the individual. In fact, we are connected to people we don't know, and the genuine "reality" is a collective one. It is a benefit to have a mechanism, like the social media, that makes these "real" connections more apparent, and that can actually turn them into practical realities.

While I am sure that there are "fake" personalities on the social media, and there may even be a few "fake" people included among my Facebook "Friends," the ties that bind us are "real," and I am happy to be reminded of that, as I watch the Facebook "News Feed" go by, revealing to "me" what "we" are all about!