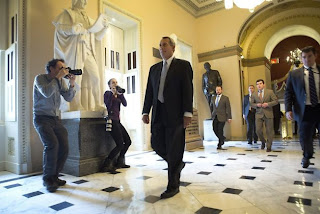 The picture here comes from an article in the Thursday, March 7th edition of the San Francisco Chronicle. I read the Chronicle, in print, every morning. The headline for this article, in the print edition, was phrased like this: "Bill OKd to keep government open through Sept. 30." What an accomplishment! Without the bill, the government is supposed to "shut down" on March 27th.

It is not "news" that our government is seriously malfunctioning. In order to address the problems that the nation confronts, we need our elected representatives to "focus in," and to be seriously involved in both defining the problems, and in working out solutions to the problems as defined. One reason that our elected officials don't seem to be doing that is illustrated by the Chronicle headline. A significant number of elected representatives actually seem to think that it might be possible to "shut down" the government. "Shutting down" the government, however, (on whatever date) is not a serious possibility.  By entertaining that possibility as a matter for discussion, and acting like this could be a real option, we distract ourselves from the actual task at hand.

Mr. Boehner, Tea Party, and other Republican legislators should stop making themselves, and us, crazy. Let's take "shutting down the government" off the table, so we can duke it out, legislatively, on the real choices we have. If Americans are disgusted with Congress (and the pollsters tell us that we are), it's pretty clear why. Members of Congress are not doing what they are paid to do.

"Shutting down the government" is not a serious proposal. So, why don't we stop making ourselves crazy? Let's stop talking about "shutting down" government, and focus in on the real questions: should we raise taxes (or not), and on whom? Should we cut spending (or not ), and where should we cut it? If our elected representatives were focusing on those questions, it would give us all the impression that Congress understands what it is supposed to be doing.

As a postscript, for Monterey Bay Area residents and Leon Panetta fans living elsewhere, you can listen to Leon Panetta's bipartisan criticism (more or less making the same point I'm making) by clicking this link.