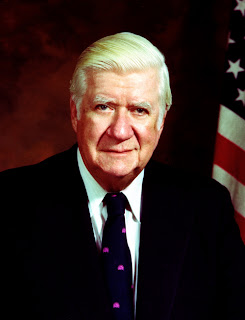 Tip O'Neill, pictured above, was the 55th Speaker of the United States House of Representatives. One of O'Neill's most quoted observations (and the title of his book) is "all politics is local." He was a darn good politician. He was a pretty smart guy.

I think it would be worthwhile to take O'Neill's statement seriously. Think of it like a mathematical equation. The word "is" is what amounts to an equals sign (=).

Since I contend that "politics" is the way that we build the "human world," the world we most immediately inhabit, it is good news to hear that we don't have to travel do what needs to be done. In fact, if we believe O'Neill, looking beyond the "local" is likely to be a distraction.

Most people shun and avoid "politics," for various reasons. For one thing, it is only rarely inspiring. Those who do interest themselves in "politics" tend to be most interested in national or international politics and least interested in local politics.

If O'Neill is right, that would be a mistake.

I think O'Neill is right!