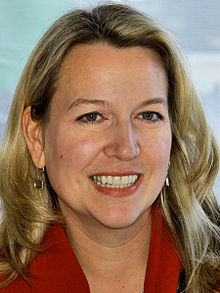 Pictured is Cheryl Strayed, who wrote Wild: From Lost To Found On The Pacific Crest Trail. That is the book I am recommending today.

I got the book as an "indirect" Christmas present (in other words, I got it after my wife, the person who really received the book as a gift, was finished with it and gave it to me). I would have thought that "Strayed," the author's last name, would normally be pronounced as "stray-ed." Having now read the book, I think that the name is probably pronounced like the word "strayed" in conventional use: "I was doing fine until I strayed from the path."

Strayed is a last name that the author personally selected, in 1995, according to a book review in the New York Times. If you read the book, you will find that Cheryl "strayed" indeed (at least if you include heroin use as getting off course).

Cheryl got back "on course" on the Pacific Crest Trail, which is where that "from lost to found" description comes from. The nice thing about the PCT, which comes through in the book, is that there really isn't any opportunity to "stray." You either go forward, or you go back: two directions; that's it. Cheryl straightened herself out with a "walking," as opposed to a "talking," cure.

This is a good book, which is why I recommend it. It is not didactic. The Times reviewer says it's "sexy." It might even stimulate someone to write their own book!