#37 / The Power Of Prohibition 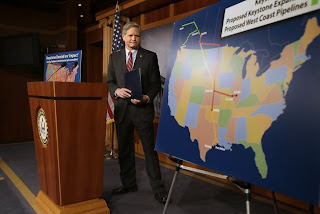 The picture provides an illustration of the proposed Keystone XL pipeline, from Canada to the Gulf of Mexico, crossing right through the United States. The February 1, 2013 edition of the San Francisco Chronicle has an important story on the pipeline. The Chronicle story indicates that environmentalists will (or should, according to some) fight the Obama Administration for the next four years, if the President does not, ultimately, take action to stop the pipeline. This will be a decision that the President can make himself, personally:

"If he doesn't reject it," said Piedmont attorney Guy Saperstein, a former Sierra Club Foundation president and prominent liberal donor, "then I think it should be all out warfare for the next four years."


The article is worth reading.


If the President's strong words about the need to combat climate change and global warming were honest, as a statement of his position, then he must and will take action to stop the pipeline. We are, in the end, defined not so much by what we "do," but by what we "won't do." This is true in our personal lives. It is true in our public policy choices.

In Santa Cruz County, the voters decided in 1978 that they would stop sprawl and save farmland. They did not do this by supporting programs that provided positive inducements for "smart growth," and for the protection of agricultural land. They did that by saying that commercially viable farmland would not be developed or divided, period. End of story. The voters said "no," and the power of that prohibition has fundamentally changed the nature of growth and development in Santa Cruz County.

We face the same kind of issue with respect to climate change and global warming. An "all of the above" strategy, with subsidies and encouragements for "alternative" energy, is all fine and good. But it won't address the problem. Human beings must stop burning hydrocarbon fuels, and we need to do that as soon as possible.

Opening up new opportunities for the development and use of hydrocarbon fuels, which is what the Keystone XL pipeline would do, stimulating the conversion of the tar sands of Canada into exportable petroleum products, means, in the words of Bill McKibben, that it is "game over" for our efforts to stop global warming and the destructive climate change that is accompanying it.

If we (as a nation) honestly want to combat global warming and destructive climate change, then we must say "no" to efforts to expand the development and use of hydrocarbon fuels. It's that simple. No Keystone XL pipeline. No "fracking" in all places where it might be possible.

Simple. And this is, in truth, the only way we can actually deal with the crisis that confronts our civilization.

"No" is a word of maximum power. In a world in which "anything is possible" (and this is, precisely, the nature of our human world), we are defined, in the end, by what we "won't do." And our greatest power, in terms of public policy, and personal behavior, is the power of "no," the power of prohibition.