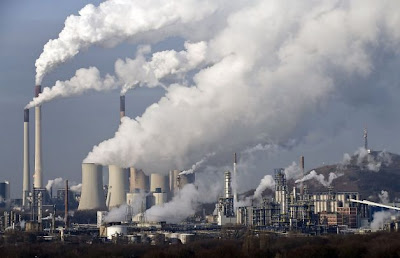 The image above was used to illustrate an article in the San Francisco Chronicle, headlined  "Immediate shift needed to slow global warming." That is the headline that appeared in the print edition, published on January 28, 2013.

The gist of the article was that global warming is proceeding very rapidly, and that it will have massive consequences for human civilization. The article was also clear that the global warming processes now at work are human-caused: "We really are a geological force that is changing the planet."

Near the end of the article, someone named Jacobson, said to be associated with Stanford University, is quoted to the effect that "wind and solar could power the world many times over." In other words, it would be technically feasible for humans to make the "immediate shift" that the article says is required.

I thought it was a good article, and the fact that it is "possible" to replace hydrocarbon power with "renewable" power is a good thing to know. To get there, however, it will not be enough to "incentivize" and stimulate renewables and alternatives.

We are going to have to prohibit the burning hydrocarbon fuels.

If you believe the article, that has to happen now. Or yesterday!