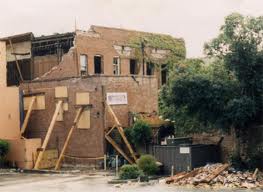 Pictured is the "old" Caffe Pergolesi in downtown Santa Cruz. This picture was taken after the Loma Prieta earthquake wiped it out - and wiped out Bookshop Santa Cruz,  too, to which the Pergolesi was attached. A picture of the "new" Caffe Pergolesi can be viewed right here. The "new" Pergolesi is still in business, and it's still a great place to drink coffee, and to hold a political meeting.


I was elected to the Santa Cruz County Board of Supervisors in November 1974, and I took office on the first Tuesday in January, 1975. Ultimately, I served for twenty years on our local Board of Supervisors, and very soon after taking office, I began holding an agenda review meeting, open to the public, on each Monday morning immediately prior to a Tuesday Board Meeting. These meetings were held, first, at the "old," and then at the "new" Caffe Pergolesi, and I continued holding them for the entire twenty years I served as a County Supervisor. That probably means about forty times a year, or 800 meetings in total.


The meetings lasted an hour. I brought my complete agenda packet, and lots of copies of the agenda itself, which I passed out to those in attendance. I would go over what I considered the "hot topics" on the agenda for the next day's meeting, and then took questions and heard comments. Anyone could attend, no reservation required, so this was a good time for members of the public to confront their elected representative, and  to get educated on what the representative thought, and to sound off on whatever issue might be important. For awhile, other Supervisors copied this practice, but I don't think that current Board members do, although First District County Supervisor John Leopold does something similar.


I have fond memories of both editions of the Caffe Pergolesi, but what really thrilled me, more than the physical location, was the excitement of participating in a genuine, citizen-based politics. For me, the Caffe meetings epitomized this kind of politics. Those who attended absolutely influenced me, right before I went on the dais  the next day, to vote, and there was a direct, person to person interchange between me, as an elected official, and those who came to the meetings, that fostered the idea that we could, acting together, accomplish whatever we wanted to do.

I will never give up on the idea that "self-government" can actually work, and my experiences in the agenda meetings held at the Caffe(s) Pergolesi are one of the main reasons.


The point, of course, is that to make self-government work, we need to get involved ourselves. You can't have democracy by way of delegation!