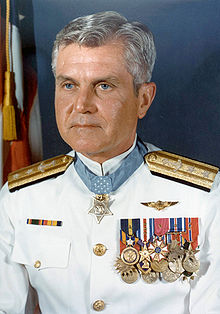 Just prior to the recent vice presidential debate between Paul Ryan and Joe Biden, The Washington Post ran an article on "The six most memorable moments in vice presidential debate history." The online version of the article (click the link) contains video snippets of all of the exchanges that the Post deems most revealing, including the opening remarks of James Stockdale, who was the running mate of presidential candidate Ross Perot in 1992.

As I have previously noted, Stockdale's debate opening, in which he voiced two questions, is generally considered as a good reason to ridicule him. The Post puts it this way:

Third-party candidate Ross Perot’s running mate opened his only debate by scoring points for originality. But it didn't help him make the case that he was a serious contender. In the long run, the decorated Vietnam War veteran’s one-liner made him the subject of jokes that undercut his aim of being viewed in the same category as his Democratic and Republican counterparts.


You can check out Stockdale's presentation for yourself by tracking down the Post's article in its online edition. To my mind, Stockdale's questions, considered on their own, are exactly the questions we all ought to be asking ourselves:

What am I doing here?


The point is, we'd better have some good idea about the answers!