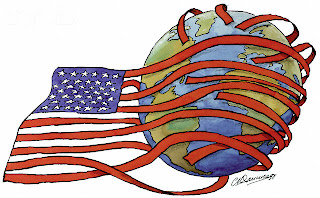 The current presidential campaign is a campaign about "economics," more than anything else. Arguably, the predominance of macroeconomic issues in our politics represents a kind of political disease state.

Here's what lawyer and political scientist Roger Berkowitz has to say in the introduction to The Intellectual Origins of the Global Financial Crisis, a new book, just published by the Hannah Arendt Center at Bard College:


Imperialism has its economic roots in the “realm of business speculation”—specifically the bursting of an investment bubble in the 1870s. As national entrepreneurs sought new markets, they enlisted state support for economic expansion. “Expansion as a permanent and supreme aim of politics is the central idea of imperialism.” The rise of imperialism, Arendt argues, means that politics becomes subservient to economics.


Arendt fears the confusion of economics and politics and especially the elevation of economics over politics. Since politics demands the imposition of limits and “stabilizing forces that stand in the way of constant transformation and expansion,” she argues that imperialist expansion brought with it a grave and destabilizing threat to the political order. When politics under the sway of economic imperatives is forced to expand on the world stage, political leaders must offer ideologies that give meaning to an ever-larger, undefined, disconnected, and homeless mass, a population that replaces a citizenry. Under the economic imperatives of growth, politics becomes world politics.


What we are witnessing in the politics of the United States today is the transformation of a politics of self-government into a politics that reflects totalitarian characteristics. What could a better indication of this change than the fact that our President is now personally and routinely authorizing the assassination of persons he has deemed to be dangers to our society (including American citizens), by unmanned drone attacks in foreign countries?

If Berkowitz is right, a dedication to "unlimited growth" is driving this totalitarian transformation of our politics. It is that same dedication to unlimited economic growth that is destroying the Natural World, upon which all life ultimately depends.