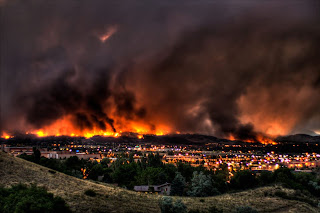 Pictured is a wildfire this summer in Colorado. That made our news. What hasn't made our news are the natural and human-caused wildfires sweeping through Zimbabwe. You can read about those by clicking the link. There is another story on the same topic here.

While the constitution-making process is still on, can what goes in it be influenced by the grave concern about the environment? Can the issue of the environment be elevated above a mere right to make it a governance issue equal to sovereignty and democracy? Is it possible to place the sustained and systematic destruction of the environment among crimes against humanity such as genocide and forcible transfer of population?”

I must say when I wrote this I had not come across the term ecocide. This week a friend commenting on the veld fires alerted me to the existence of the word.

Ecocide is the extensive damage, destruction to or loss of ecosystems of a given territory, whether by human agency or by other causes, to such an extent that peaceful enjoyment by the inhabitants of that territory has been severely diminished.

Her campaign, and that of like-minded people, is that, “there are currently four crimes against peace: genocide, war crimes, crimes of aggression and crimes against humanity. Ecocide is the missing fifth crime—it is a crime against humanity, against current and future generations, and against all life on Earth.”

I have argued that 10 years from now elections in Zimbabwe and the rest of the developing world will be fought and won on the environment. The parties that can articulate their programmes on how to maintain our environment, and hence our own survival as a nation, will come to the fore. In other words environment issues will set “regime-change agendas”.

The emergence of Green movements around the globe in the past three or so decades should not be dismissed contemptuously as being of nuisance value simply because their presentations in parliaments is still weak. Their beliefs will begin to come to the fore when the world begins to realise how important the issue of the environment are for the very existence of humanity.

Green parties’ main focus is environmentalism. The Green Party of the United States, for example, has as one of its major tenets what it calls “ecological wisdom”: “Human societies must operate with the understanding that we are part of nature, not separate from nature. We must maintain an ecological balance and live within the ecological and resource limits of our communities and our planet. We support a sustainable society which utilises resources in such a way that future generations will benefit and not suffer from the practices of our generation. To this end we must practise agriculture which replenishes the soil; move to an energy efficient economy; and live in ways that respect the integrity of natural systems.”

Zimbabweans should begin to think in a similar manner. The environment is still a peripheral issue in determining how our country should be governed. This is despite the fact that our very delicate environment is a constant threat to national stability.

Let's learn something from Zimbabwe. Living in a correct relationship with the Natural World is preeminently a "political" question.